I got to know Rita and Graham Edwards in London in the year 2000, a short while after arriving to live and work in this extraordinary city that so often gave the impression of being able to house all our dreams.

At that time, Rita and Graham were very active members of ATD Fourth World in the UK. Even though they had to fight so much to survive poverty, they participated full of enthusiasm in the numerous projects developed with the aim of influencing the country’s social policy. They were the kind of people who never missed an opportunity to bring along people living in poverty like them that could gain strength from the collective fight. I still remember today how often Graham repeated that it was all about togetherness, a state or feeling of being close to one another, of being together.

A short while after my arrival, Rita and Graham moved for a better life in Hull, a city in the northeast of England. Despite the warmth of its people, it is difficult to imagine the desperation that must could have made them believe that they would build a better future there, in the poorest city in the UK, according to most indicators. 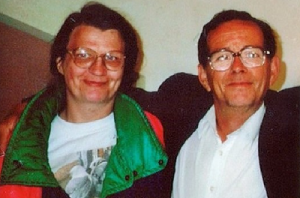 In the midst of the neighbourhood beset by chronic poverty to which they moved, Rita and Graham created a lot of links, ties of friendship, that were strong in solidarity, but also fragile, weakened by the tensions that survival provoke, by everyone’s needs, by hunger and the cold; such cutting cold through those old street of the port city that no longer has work to offer anyone.

Despite the fragility of those emerging relationships, and with the hope of being able to strengthen them, Rita and Graham shared tirelessly with their neighbours about ATD Fourth World and our way to conceive the fight against poverty: a movement of unity, and fraternal and collective struggle, a movement that puts the thinking of the poorest at the centre of its action, a place where each person can give the best of themselves. Beyond their neighbourhood, they also sought partnerships with local organisations, churches and social movements. Despite their daily life, so besieged by poverty, they were able to build togetherness and get involved in various projects that implied a political participation that could bring about change.

Graham very often called the headquarters in London to speak about those projects. With the enthusiasm which characterised him, he always said at the beginning and end of each conversation, “Hull is growing!”. By repeating this sentence, “Hull is growing!”, Graham was speaking of seeing the personal ties grow and managing to get others to join the ATD Fourth World project. This was how he measured the growing of the city. One day, Rita and Graham spoke of a new project: bring together people and funds to put up in a Hull Cemetery a headstone in memory of the poor who had been buried in unmarked graves, without headstones to mark the existence of their name. Although we decided from the beginning to accompany them in the project, I’m not sure if at that time we understood its depth. I believe that there have been a number of events afterwards which have enabled me, and which motivate me today, to write.

Rita and Graham managed to convince others and raise the money necessary to inaugurate on 17 October 2002, International Day for the Eradication of Poverty, a headstone in the cemetery which reads: “In memory of all those who lie in unmarked graves in Kingston-upon-Hull.“

A few months later, I had the chance to visit the cemetery with them. Moments after arriving, we saw from the gate an old woman who walked very slowly just a few metres in front of us, faltering slightly with a bunch of flowers in her left hand. From afar, we saw the woman leave her flowers on a black headstone, alongside others that had already been left. Once close enough to read, I saw that it was the headstone for those buried in unmarked graves. We saw the woman speak or pray and there and then Rita and Graham explained to me how many people came to tend the headstone, to put flowers on it, to have at last a place to honour their dead. Afterwards in the church, I was moved to browse through the visitors’ book that invited Hull’s residents to write the names and surnames of its dead who had been buried in unmarked graves. Dozens of pages with hundreds of names who had at last been named and messages which repeated that this headstone was an act of justice and recognition which allowed living relatives and friends a little peace.

A few years afterwards, Rita and Graham wanted to put together an album which told the story of their personal and family fight against poverty, as a way to bear witness and place their story of a poor family in the history of humanity. A member of the ATD Fourth World team accompanied them in this project, investing hours and hours together to record and transcribe their account. The result was a beautiful album of which various copies were made, and led to times spent sharing around the album and with them. One night, in our house, a small group met together to listen to Rita and Graham share their album. That night, I learned of the premature death of one of their children, a girl that they had to bury in an unmarked grave. None of us had known about little Amanda during the year spent gathering people for the headstone, but there was Amanda’s photo and, a few pages later, the photo of the headstone. They were both in the album which told their story, in the album which gave sense to their suffering and combat. There was possible justice carried out, not just for little Amanda, but for others too.

Graham died in his early fifties, not long after finishing the album. He was too young, but death occurs too soon in bodies which have been punished by deprivation. Rita, and all the members of ATD Fourth World in London came together with aim of raising the money to engrave his headstone, as a knee-jerk reaction against never ending poverty, against the injustice that never ceases if nobody puts an end to it. A little while after, Rita died, again before reaching sixty. We buried her next to her husband and we managed to engrave her name too on the headstone.

Like a circle which goes full loop, like an end for my own understanding, as a way to honour the understanding which Rita and Graham pushed me towards, research took me again to a cemetery. There I saw with my own eyes the place for the poor’s death: neither graves, nor headstones, nor the greenery of English cemeteries. Just mounds of sand without any kind of marking, barely perceptible when a certain amount of time has passed. A metaphor for the abandonment of part of a city which gives the impression of being able to house all dreams.

I find it now hard to understand how I couldn’t appreciate from the beginning the full depth of Rita and Graham’s project, the extent of the resistance that their project contained. In fact I realise now how invisible it is to us the resistance practiced by the poorest throughout their lives, for themselves and for others; how invisible this culture of resistance to injustice and violence is, this culture which is the common thread in their lives, a way to remain standing and build togethernes.

Just a few days away from a new 17 October, International Day for the Eradication of Poverty, I write about Rita and Graham to highlight life and not death, to speak about this culture of resistance to injustice and violence. A culture that I yearn for each one of us, a gift which the world cannot do without, a motor for change that I can also chose to set in motion.