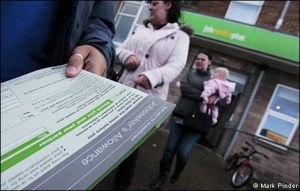 The UK Prime Minister, David Cameron, is promoting good citizenship through what he terms “The Big Society”, encouraging ordinary people to give time to support individuals and organisations in their communities as volunteers. As the cuts in services imposed by his Government take effect on the most vulnerable, an army of such volunteers will be needed to fill in the gaps and many want to, and already do, help others. This can create confusion when those wanting to volunteer are receiving benefits.

There is an ongoing campaign in the UK of vilifying and criminalizing people who “cheat” the benefit system. We hear and read the phrase all the time, ‘benefit cheats’, and we think we know what that phrase means. Benefit cheats are people, who claim thousands of pounds of benefits while working; who claim benefits by pretending to be injured or disabled while fully fit; who claim benefits saying that they are lone parents while living with a man who works; who deliberately set out to commit benefit fraud. Is this really the profile of everyone who could be labelled a benefit cheat?

What would we call Ian, who often helps his elderly neighbours with D.I.Y jobs that they can’t manage? In return he usually gets a nice Sunday lunch and five pounds to buy a couple of beers – is Ian a benefit cheat or a member of David Cameron’s Big Society?

And then there is Rani, whose sixteen-year-old daughter Leah baby-sits for friends and family to earn enough to buy the essential things her mother – who is on benefits – cannot afford. This benefits the parents of the children she looks after and helps Leah develop skills and a work ethic. It also brings undeclared income into the home so, does it make them Big Society members or make Rani a benefit cheat? Hannah looks after her granddaughter while her daughter works which means that Hannah cannot job-seek as often as the benefit rules demand, but prevents both women being unemployed and on benefits, is she good citizen or a cheat? Even volunteering with a charity, a foundation stone of the Big Society can be interpreted as cheating if you are on Jobseekers Allowance.

Of course there are those who set out to cheat the taxpayer, sometimes on a massive scale, but many people fall foul of the letter of the law by not understanding that they are doing wrong. Benefit forms are complicated and the rules are complex. One mother has found herself in thousands of pounds of debt due to overpayments of disability benefits because she took in her homeless son but did not inform the relevant authority that he was living with her. She thought she was doing the right and decent thing, was no better off financially, but unknowingly broke the benefit rules. So who is a benefit cheat, do we really know what stories are behind the headlines?

If you are on benefits but do a little occasional work and get paid, you are called a cheat. What then should we call those on benefits who accept money from the Government to report any other benefit claimant who seem to be working? Are the payments offered to spy on neighbours and to report any apparent ‘work’ they are doing going to prevent people like Ian, Leah and Hannah from helping and supporting others? Should a mother have to consider benefit impacts when one of her adult children needs to move in with her or be homeless? Will this Government’s obsession with cheats completely undermine their ideal of a Big Society – with the result that only those not on benefits will be included and allowed to contribute?

One thought on “Big Society and the Benefit Cheats”