What a relief; it is finally done. It took me 10-11 months of pretty consistent effort (when I wasn’t travelling) but I finally escorted the street-homeless couple Nadine and Jeffrey in a taxi to the shelter for adult families over at 30th Street and First Avenue. (The cab driver was fit to be tied when he saw two homeless people jump in his new cab. It didn’t help that Nadine was drinking a large can of sugared iced tea covered by a brown paper bag.) I wanted to get them off the street before the Pope arrived this afternoon because the traffic patterns would have prohibited us driving cross-town easily for a few more days.
I went inside with them and got a supervisor to expedite their registration.

For my friends who don’t understand why it should take so long, let me explain that the intake process requires photo identification which they didn’t have and originally couldn’t get because they were rejected by rude faceless bureaucrats so many times. I took them to the Public Advocate’s Office twice and to Coalition for the Homeless and got official letters which worked to secure them the photo identifications (and food stamps and Medicaid coverage). In addition (as I previously wrote about on 25 August), the shelter also requires an original domestic partnership document from the City Clerk’s office.

Then, there were the multiple rainstorms during this period which obliterated whatever documents they had. Fortunately, I insisted on making copies of all important documents in my office so I could at least replace them with photocopies.

There were several thefts of their few possessions….everything from the aforementioned photo IDs to a mobile phone to bags of clothing. (The city streets are a cruel place to live.) And let’s not forget the evil young girl who kicked Nadine in the face while she was sleeping on a subway car during a cold night earlier this year. This caused her dentures to fall out and roll or be kicked into the gap between the train and the subway platform as the doors opened.

I think I was moved to help for two reasons: (1) I could not, in good conscience, continue to walk past and ignore them whenever I came and left my office building and (2) Nadine, in one of my first conversations with her, said she didn’t want to live on the streets anymore and yearned for a roof over her head, a bed, and a hot shower. (They had been buying containers of alcohol wipes from a nearby dollar store and using the restroom at a nearby Starbucks to clean up each day.) I am more than happy to give a hand up to someone who knows what they want. I am considerably less enthusiastic about hand outs (but I have decided that $5 gift cards from local food and coffee stores at least ensure that the money spent will be used solely for its intended purpose).

Another thought: For the system to work fairly, it needs to be accessible to those people who don’t have a GED (General Equivalency Diploma) or a high school diploma. This couple made it through 9th grade and the ‘system’ had rejected them some 7 or 8 times already over the years… so much so that they feared going back. Today was the first time they went back in over two years. I was surprised at the anger and hostility they showed — even in front of the supervisor who came out to help (probably because I was looking out of place wearing a suit and tie) — but decided that this was a cover for their fear of being rejected yet again. By the time I left, they were in good humor again but there was definitely a point when I felt that we might all get thrown out…

Here is a picture of how clean they left their street corner (where they had lived for two years) before joining me in the taxi and, of course, a picture of the grateful and happy couple themselves who are looking forward to a bed, a roof over their heads, and a hot shower for the first time in recent memory. Godspeed! 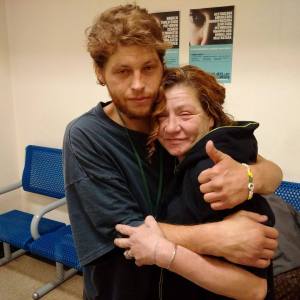 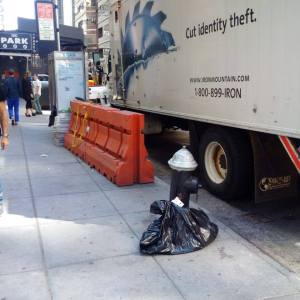 I turned the corner this Sunday afternoon to go into my office building and found them on the corner watching the remnants of a Polish parade.
The good news is that they are still in the shelter and they said it feels good to sleep on a bed in a heated room with (even) a private bathroom.
Nadine handed me a letter from the Department of Homeless Services that had the most ridiculous demand. Keep in mind that (other than the past 11 days) this couple has been street-homeless (living on the street) for two years. Moreover, I state this clearly in my support letter for when they entered the shelter system. I also give the name of a non-profit and the phone number of the case manager who can confirm it. I replicate the DHS request, in part, here:
“The applicant must provide proof of her whereabouts from September 2014 to September 2nd, 2015 and the co-applicant (her domestic partner/husband) from 8/26/15 to 9/2/15; 5/26/15-6/2/15; 4/23/15-5/2/15; 4/6/15-4/21/15; 2/20/15-3/19/15; 1/15/17-1/26/15 and 11/5/14-11/28/14. Proof of residency are mail, bills, letters, postmarked envelopes, etc. Proof of street homeless is where yu (sic) ate, washed, and slept.”
I could scream. These people are idiots! They don’t even read the detailed letter that was scanned with all their other documents. Can we impose an idiot test on the employee recruitment process at DHS, Ritchie Torres and Dirk McCall?

3 thoughts on “Finally Allowed to Live in a Shelter”