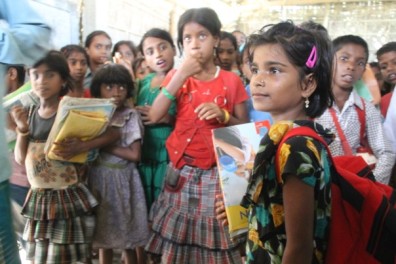 20 November marks the 25th Anniversary of the UN Convention on the Rights of the Child. And next year the Millennium Development Goals will draw to a close. When, if ever, will children — at least in most parts of the yet developing world — be able to finally celebrate their childhood…and get to be educated, healthy and protected as per the Rights so nobly accorded to them?

“The Child is grown

The Dream is gone

I have become comfortably numb”

In a remote corner of Assam in eastern India, in a village not listed in Google Maps, I noticed 7-year-old Makhmuda Begum standing aloof even as the Child Protection Committee of her village was proudly showing us around the school. By the end of the day, this girl – who had never been to school – was enrolled to begin her studies after our NGO (Save the Children) intervened on her behalf, having earlier rescued her from an abusive father who had forced her mother and brother to run away, to leave her to do the household chores while he worked in a brick kiln. But there are many more Makhmudas in every corner of India, South Asia and beyond.

A few months later I was back in Assam, in May 2014, to walk through the charred remains of villages burnt down in communal violence. In the most horrific and haunting scenario that I’ve ever encountered, children were shot dead from close quarters around their homes, along with their mothers and elders, while most of the men were at the marketplace to sell their vegetables in the afternoon trading session. Some children were able to escape, jumping into a river that tumbles down from Bhutan, with a tiger reserve to contend with on the other side. But only a few of them survived the river and a night in the forest while many other children, some obviously too small to swim, simply drowned. Till today, children in these villages are not allowed to even go to school by their families, who are scared that they may be confronted with more violence.

Further away in South Asia, to the most war-ravaged nation on Earth, Afghanistan, I visited orphanages and children who had been affected by violence, shot with bullets or crippled by land mines. Beautiful compounds which were schools for girls lay deserted as the law of the land seemed to be that girls should not study. In villages across Nepal, I found that there were some where there were few adolescent girls around – they had been sent to Mumbai or other metros to work as prostitutes, often returning to their villages only when they were HIV-affected and too ill to manage without help.

In South Africa, where I lived for several years, I saw a whole generation of black children toiling at school to overcome the education barrier that had ensured that in previous generations, girls only learnt how to be house maids and boys to toil in mines and factories. Meanwhile, crime in Johannesburg and other parts of that country — targeting the wealthier elite (mostly whites) — continues to spiral, as political freedom has not really paved the way for economic equality.

Around the world, children are the worst-affected in humanitarian crises, ranging from conflict to ‘natural’ disasters. Lately, large numbers of children have suffered in Gaza, Syria, many parts of Africa and South Asia. In India itself, there has been a spate of catastrophes during the year 2014. There were flash floods in Uttarakhand, followed by a cyclone in Odisha. This year, Jammu & Kashmir were drowned in floods, along with several other states including Assam, Bihar, Uttarakhand, Uttar Pradesh and West Bengal. On 12 October, the very day that a cyclone made landfall in Odisha last year, a cyclone descended on Andhra Pradesh. With so much happening, relief for the affected was severely limited. Even the local and national media paid scant attention to the plight of the dying, the orphaned and the homeless. The ‘cool prediction’ aided by dynamic and fast-developing technologies says there will be more disasters in the future, which is not good news for children.

In Uttarakhand in 2013, I had  a father escorting his three children to a safe haven after their home had been washed away. Speaking to them leisurely while waiting for some means of transport to arrive on the damaged road, the children pointed out that they didn’t want to be in a ‘safe’ place and would rather go back to their broken home – at which point the father decided to take them back to their village rather than leave them at a relative’s house in an unaffected region. Children have their own perspectives but how often does one listen to what ‘they’ really want?

Sadly, the World does grow weary with all the challenges out there: even when it comes to its children who are helpless spectators, needing the most and often getting the least. And even though most of the aid coming to the Social Sector is meant for children, it cannot be enough, because more and more children are becoming more and more vulnerable as time goes by, adjusting to the new reality that childhood is not what it was and probably never will be as it is meant to be, ever again.

Earlier this year, Save the Children released a report on Newborn Deaths. Startling as it may seem, 300,000 newborns lose their life on the very 1st day of birth in India—these deaths can be prevented by simple and inexpensive mostly household practices. Child Survival has yet to be categorized as a humanitarian disaster — be it in India or the rest of the world – despite witnessing more than 8 million deaths annually. While child survival rates have shown some improvement, newborn deaths have been tougher to tackle. Apart from neonatal and infant deaths, children are plagued by the menace of malnutrition, which has a lasting impact on their lives. Today, at a function in Delhi, Save the Children releases a report ‘The World of India’s Girls’ and in January another report will be launched focusing on the urban child – and so the writing is on the Wall. The plight of children is a saga that can just be touched upon in this blog or in Reports. We – government, civil society, media, donors, parents, teachers, health workers and the public at large — know what needs to be done. But haven’t we become Comfortably Numb?

One thought on “UN-Conventional Childhoods”