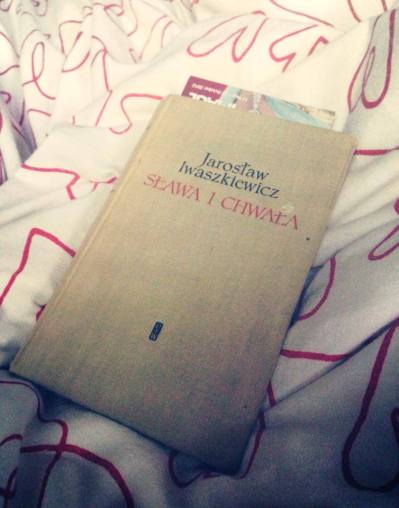 What happens when you bring books and reading to a public space? I asked myself this question during “The Big Book Festival” in Warsaw. It is a festival which offers many events around books and reading. One of its peak moments the event this year was a reading marathon, during which actors read excerpts from the works of one the most renowned Polish writers of the twentieth century: Jarorsław Iwaszkiewicz.

Jarosław Iwaszkiewicz is one of those writers who left a wealth of short stories, novels, poems but also personal correspondence and journals. The marathon reflected the different stages of life: from affectionate letters to his young wife, to poetry on aging and the passing of time.

The reading was held in a particular place: an entrance to an underground passage which links the Warsaw Old Town and a busy street through an escalator. It is a place pulsing with constant sound and movement. That evening, a stage was set up, and wooden crates were put out for listeners to sit on. In a way the reading followed the rhythm of the place: anybody could come and stay for as long as they wanted. The audience could have been made of faithful festival goers as well as of incidental passers by.

From time to time, a homeless person would come. I could see the surprise on their face, perhaps questioning themselves about the nature of this gathering… They would sit on one of the wooden boxes, rest their heavy bags and close their eyes as if dozing off. They would not stay long, as at some point a security guard would come and urge them to leave. I could not find a justifiable reason why they should be chased away. Was it because a person “used” the opportunity to sit down and maybe sleep? What if I had dozed off, would they have told me to leave? Or perhaps they did not correspond to the definition of the ideal reader who is clean and shaved?

There was a group of homeless men who did behave loudly, but ironically their loudness could have been seen as an integral part of the piece that was being read. It was short story told in the first person by an elderly man who is sitting in a bar and clearly has had a rough life. He starts talking to another man, and the whole story is his monologue, his reflections on life and booze told in an ironic and bitter tone, with a touch of harsh humor. That group of homeless men were probably a bit tipsy themselves, but they seemed to listen and commented on the story with laughter or shrieks, as if sitting in the bar in the story. Or perhaps they recognized some of their own experiences in the person of the main character? 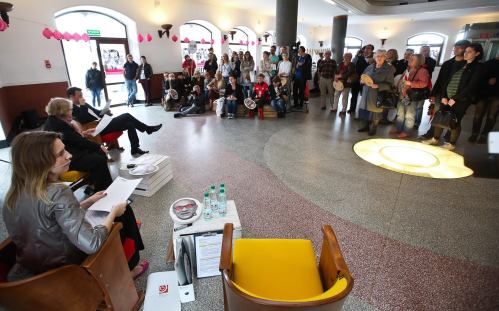 I was drawn to the texts that were being read, to the rich and complicated relationships Iwaszkiewicz had with his family and the world. But at the same time I felt a growing discomfort. I wish I had had the courage to talk to the guards and ask why they were telling all these people to leave. I did not. I stayed glued to my spot, afraid to cause a commotion.

There was one homeless man who touched me deeply and nobody said anything to him. When he came to the passage he stood at a distance and seemed to be authentically engaged in the flow of words. It was almost at the end and there were many empty seats. Finally, he sat down. His face was attentive and eager. The pieces that were read at that moment were not easy to listen to, as these were excerpts from Iwaszkiewicz’s journal at a time when describes his fascination with a much younger man, who is terminally ill. He talks about the dying, lost youth, desire and the impossibility of this relationship. I watched the man’s face, and not once did he drop the gaze from the actors who were doing the reading. He stayed to the end.

I often think of that evening, about how beauty can be intertwined with fear and about how if we bring books to the public space, are we ready to welcome all those who share our streets?